Introduction to Tropical Gardening for Sydney and Melbourne gardeners

It would be nice if everyone could live and garden on a tropical island but unfortunately we can’t. However with good species selection and understanding how to create a good microclimate even some Victorians can give their gardens a Resort Style Tropical Feel.

Looking at a zone map of Australia is a good place to start. It will give you an idea of what kind of climate you are in. Australian zone maps tend to be different because our winters are a lot warmer.

Temperature isn’t the only determinant of plant survival. Soil moisture, humidity, wind and position in the garden can also play a significant role. Also some tropical plants don’t tolerate wet winters (like in Sydney) and will rot. And just to complicate things further the microclimate of your garden will strongly influence your success. If you understand the theory behind microclimates you can often grow a wider selection of tropical plants successfully. In previous articles we touched on how to help create a good microclimate for tropical plants. Microclimate is particularly important in areas where conditions are less than ideal for tropical plants. Walls are often used for protecting plants from strong winds and can radiate heat at night and keep plants cooler during the day in semi arid climates. Planting a canopy to protect from frosts and increase humidity, adding a small water feature or paving can all add to creating a microclimate. Cities are usually warmer than surrounding rural areas due to “Urban Island Heat” This is a bonus for tropical gardeners in places like Sydney and Melbourne.

Now that you have a better understanding of your climate and creating a good microclimate for tropicals it’s time to get planting!!

Spring is best for purchasing your tropical plants. You can put them in a pot until they establish roots and plant them out into your garden by summer. That will give you maximum growth before winter hits. If you have a Greenhouse then you can get your plants any time. Just remember many tropicals will go semi dormant if the temp drops below 15 deg.

While we think of costus and gingers as tropical plants a surprisingly high number come from places like China and the Himalayas.

The easiest of all gingers for cool climate gardeners to grow is the hedychiums. They will even grow in frost zones but will just become deciduous. Tropical plants grown in cooler climate gardens will often be shorter than those grown in tropical and subtropical areas but still flower well. Their lush tropical foliage and beautifully scented flowers make hedychiums a must have for cool climate tropical plant lovers. They can be used in borders, as bedding plants or grown in containers. 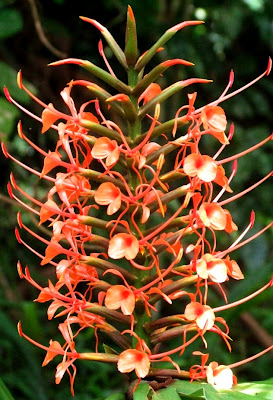 Hedychium coccineum will survive an astonishing -18 deg. The powdery stems have a lovely purplish hue and the large flaming orange flower spikes sizzle with tropical colour in summer. H. coccineum will tolerate a wide range of conditions from full sun to light shade.

Hedychium aurantiacum is an Indian variety similar to H. coccineum but with more narrow upright leaves.

Dr Moy will grow down to -15 deg Dr. Moy is a hybrid of flavum and coccineum and semi dwarf in habit. It’s a heavy bloomer with tangerine coloured flowers but it’s the variegated foliage that makes it one of the best hedychium hybrids ever produced. We will have it available in spring 2010.

Cream hedychium will grow down to -10 deg and is a very robust grower with a long flowering season.

Many zingibers will also grow outside of the tropics and subtropics.

Z. spectabile will grown down to -7 deg but may become deciduous. Just be careful of wet winters by either putting it in a very well drained bed or keeping it in a large pot.

Z. zerumbut darceyi is deciduous and will grow down to -10 deg. It has bold variegated foliage and flowers basally. It is sometimes called shampoo ginger. 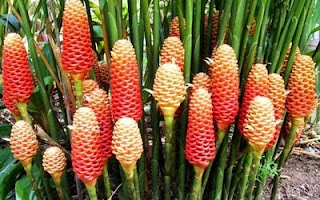 Some Alpinias are also a good choice for cool climate gardeners.

Alpinia formosana will drown down to -12 deg and is native to Taiwan. The subtle pinstripe variegation makes this alpinia an elegant addition to any tropical garden.

Alpinia galangal is an edible ginger often used in SE Asian cooking. It will grow down to -12 deg. The foliage is lush, dense and tropical while the tiny aromatic white flowers are held on large sprays during summer.

Alpinia nutans will grow down to -10 deg. It is often called false cardamom and has foliage with an exquisite aromatic fragrance. It grows in small dense clumps( under 1 metre tall) with tough glossy leaves.

Alpinia zerumbet or “Shell Ginger’ likes a warm sheltered sunny spot with plenty of water and will grow down until -12 deg. The longs sprays of drooping bracts resemble pearly shells from which orchid like flowers appear.

Alpinia zerumbet variagata also grows down til -12 deg and has yellow and green foliage.

Most costus species aren’t suitable for temperate gardens but few have proven themselves as very hardy.

Costus barbatus will grow all the way down to coastal Sydney in a sheltered position. It has lovely red bracts that elongate with age that appear from both the top of the leaves and also basally. The backsides of the leaves are fuzzy.

Costus pictus will grow to -12 deg. It is the easiest to grow and hardiest costus for cold climates. It produces tall cane like stems with attractive markings resembling hieroglyphics. The stems are used as foliage in flower arrangements; it flowers basally with a green beehive like flower. The thick stems will tolerate frost but during prolonged frosts cut back as the plant will reshoot in spring.

Costus pulverulentus grows down to a nast -7 deg it has fuzzy leaves and long overlapping scarlet bracts that appear from the top. It makes a very good bed filler.

Costus spiralis or “strawberry bud costus” as it is often called grows to -4 deg. The pink flowers emerge from rounded deep pink bracts. It makes an excellent cut flower.

Costus woodsonii or “French Kiss” is deciduous in cold climates. It has small bright red cones on tall cane like stems. It is often grown commercially as a cut flower.

Costus scaber or “Indianhead costus” will grow down til -10 deg and flowers for 9 months of the year. It is naturally evergreen but will adapt to a deciduous habit and reshoot in bring in frost prone climates. It is the largest of the cold hardy costus.

Curcumas are exclusively deciduous plants. They have evolved their dormancy to cope with dry seasons in monsoonal climates. Winter dormancy makes them some of the hardiest of the neotropical gingers.

Any of the curcumas listed in our plant catalogue is suitable for cool climates but Curcuma australasica is the hardiest of the curcumas and is also native to the Top End of Australia. It is often called” The Cape York Lily”

In some areas of Victoria (like Melbourne) heliconias will grow. However, this will depend strongly on microclimate. It is outside of our level of expertise to recommend heliconias for gardens in Victoria without actually seeing the garden and soil testing. 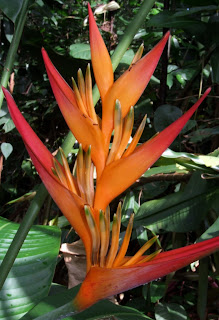 Many of the other tropical plants available on our website are suitable for cool climate tropical gardens and later this month we’ll be focusing on aroids, cordylines, brugmansia and pandanus for cooler climates.

A tropical resort style paradise can be achieved even in a cool climate with proper species selection and a good microclimate. We hope this information will prove useful to you in creating your own paradise.

By: Andrew Comley on 18 January 2016
Hi, i am a fan of a lush mainly green broad leaf plants with bright flowers. I have a mainly palm filled smallish back yard facing east with a northerly aspect. I would like to infill between the palms with this type of plant first question is will they grow in the Adelaide climate if so what type of plant would you recommend? i do like the Kauwalchi style.