Costus are tropical plants related to gingers in heliconias. They originate from areas all over the globe including Africa, the New World and Australia. There is so much variability in costus that it is hard to generalize about them. Some flower from the top of the stem, some from the base of the plant and some from both! There are hairy ones, pretty ones, full sun and part shade costus. Many are so cold tolerant that they will grow in England some prefer warmth.
In general and when in doubt costus like part shade and well drained soil rich in organic matter.
If possible we recommend potting your costus up. They can be planted out when they shoot and establish roots. If you are in a particularly cold area it is best to purchase your plants in spring so that they have a full growing season before encountering winter conditions.
You'll find more information on them in our blog.
I believe them to be highly underutilized as landscaping plants. You'll find more information about them on our blog. 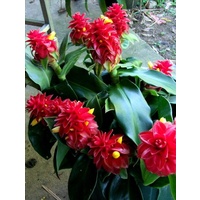